The Boston Printmakers is entering our 70th year, and the members’ exhibition title Marking Time seems particularly consequential.  In celebration of this milestone, I would like to recognize the membership for its high level of participation in exhibitions and programs throughout the years. You keep this organization vibrant and forward moving, and I want to thank you all wholeheartedly. 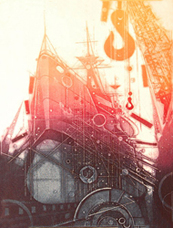 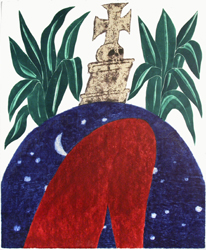 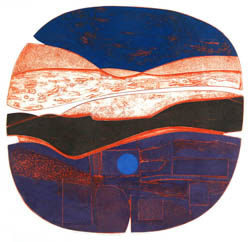 Anniversaries are also a time for reflection, and during this 70-year period when printmaking has advanced exponentially, we can look back on the many pioneers who have contributed. Since I usually reach out to our emeritus members to encourage them to submit to our members’ shows, I sadly learned that we lost five luminaries this past year: Donald Stoltenberg, Carol Summers, Richard C. Bartlett, Vivian Berman, and Clare Romano. Three of the five were pioneers in collagraphy who either wrote books on the medium or were represented in books that were written. All were masters who contributed many innovative techniques to the printmaking field through their profound, productive careers. 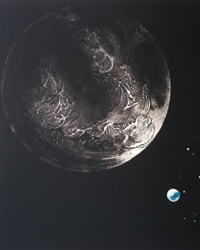 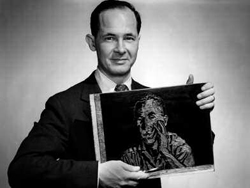 While remembering these legends in this newsletter and prior members’ news, I feel privileged to share the story of one of our founders, Richard C. Bartlett. I hope you will appreciate learning about or remembering his contribution to our organization through this [abridged] essay by David Acton from 60 Years of North American Prints:

The founding spirit and first president of The Boston Printmakers, Bartlett’s influence on the organization was brief but profound. The son and namesake of a Boston painter, he was born in Brockton, Massachusetts, on January 8, 1924…. In 1941 Bartlett enrolled in the professional course at the School of the Museum of Fine Arts, but World War II interrupted his education. He became as a bombardier-navigator in the Eighth Air Force of the Army Air Corps and flew thirty-five combat missions over Europe. [In] 1945, Bartlett returned to the Museum School, [where] he was drawn to printmaking. As he and his fellow students became skillful they were encouraged to take advantage of the American printmaking establishment, such as it was. For two generations a handful of national print exhibitions had become the customary vehicle for establishing reputations in the field. [M]ost were organized by artists’ clubs—like the Chicago Society of Etchers, the Brooklyn Society of Etchers, or the California Society of Printmakers—which sometimes sent the exhibitions on nationwide tours…. Bartlett and his colleagues sent their work to national shows, and occasionally won prizes. In their lunchtime conversations they bemoaned the scant opportunities to show their prints locally. They agreed that Boston should be the home of a printmakers’ organization and the site of a national exhibition.

Arthur W. Heintzelman of the Boston Public Library, the city’s most esteemed printmaker, encouraged the young printmakers, pledged his personal support to their scheme, and offered use of library facilities for organizational meetings. His influence is apparent in the detailed program of the Boston Printmakers’ first general meeting. Carefully planned and announced in the newspapers, it took place on the evening of Friday, October 27, 1947, in the Wiggin Gallery of the Boston Public Library. The agenda considered the graphic arts in practical ways… [it] began with three thoughtful talks about the nature of the original print: “What the Artist Looks for in a Print…” “What the Dealer Looks for in a Print…” and Heintzelman reflected on “What the Collector Looks for in a Print.” Present that evening…were several professional printmakers, dealers, and collectors from around New England…. The student printmakers took the floor for the second half of the meeting to describe their vision. They emerged as the founders of the Boston Printmakers, and committed themselves to the considerable work required to launch and sustain such an ambitious project. The colleagues who first conceived the organization were elected as its officers: Bartlett as president… They articulated a three part mission for the group: to provide opportunities for the printmakers of Boston and New England to show their work; to acquaint the public with fine prints and their stature as original works of art; and to create a permanent meeting place for the organization.

Richard’s and his classmates’ vision was well conceived. The Boston Printmakers still retain many of their ambitious goals and maintain the relationship with the Boston Public Library, where our archive and print collection are held. Ironically, Richard lived in Cotuit, the town where we will have the Marking Timeexhibition this summer, and works by Vivian and Carol will be included in the show.

I hope you find the lives of these distinguished emeritus members inspiring.

I wish that we all have such long, celebrated, artistic careers,