Paul DeRuvo is at an exciting point in their career. Recently, they had a show at the Center for Contemporary Printmaking (CCP) in Norwalk, CT. The show was a timely culmination of their ten years at CCP. Paul has been involved at CCP since they were an intern, returned as a staff printer, and, recently in February, stepped back. They are applying to grad schools and will use the time to develop work full-time. In between those endeavors, they are completing some ongoing projects independently of CCP but is still doing contract work at CCP on their own.

A former classmate, Andrew Stearns, interviewed Paul to get some insights on their work, research, and process.

AS: Why don’t we start with your residency?

PD: I applied to the residence in Montreal because I knew there was a lot of research I could keep doing in the materials that are suited for silk aquatint. There are so many acrylic mediums available that can be used with a collagraph substrate, which silk aquatint is especially receptive to. I’ll actually be bringing some of those techniques back to Boston when I do a workshop at MassArt in February as a visiting artist, which I’m excited to do. There  areso many available mediums and they each have their own painterly mark to them.

I applied to the residence at Atelier Circulaire to bring my research into making large scale silk aquatint plates, as well as continuing the research on new materials. That resulted in this 42 x 54-inch collagraph that I spent half of my residence making. Which formed the centerpiece for the show. My goal there was to create prints that read as paintings. They have the scale and range of marks that you would find in any other kind of painting, yet are reproducible and also lend really unique visual characteristics. For example, the flatness of the black and the density of it. Only mezzotints give you anything similar and certainly, at that point, not at the scale. With the silk aquatint and through the reductive mark making – working black to white – there’s a unique quality to it. A quality of the light that is emanating from the figures. 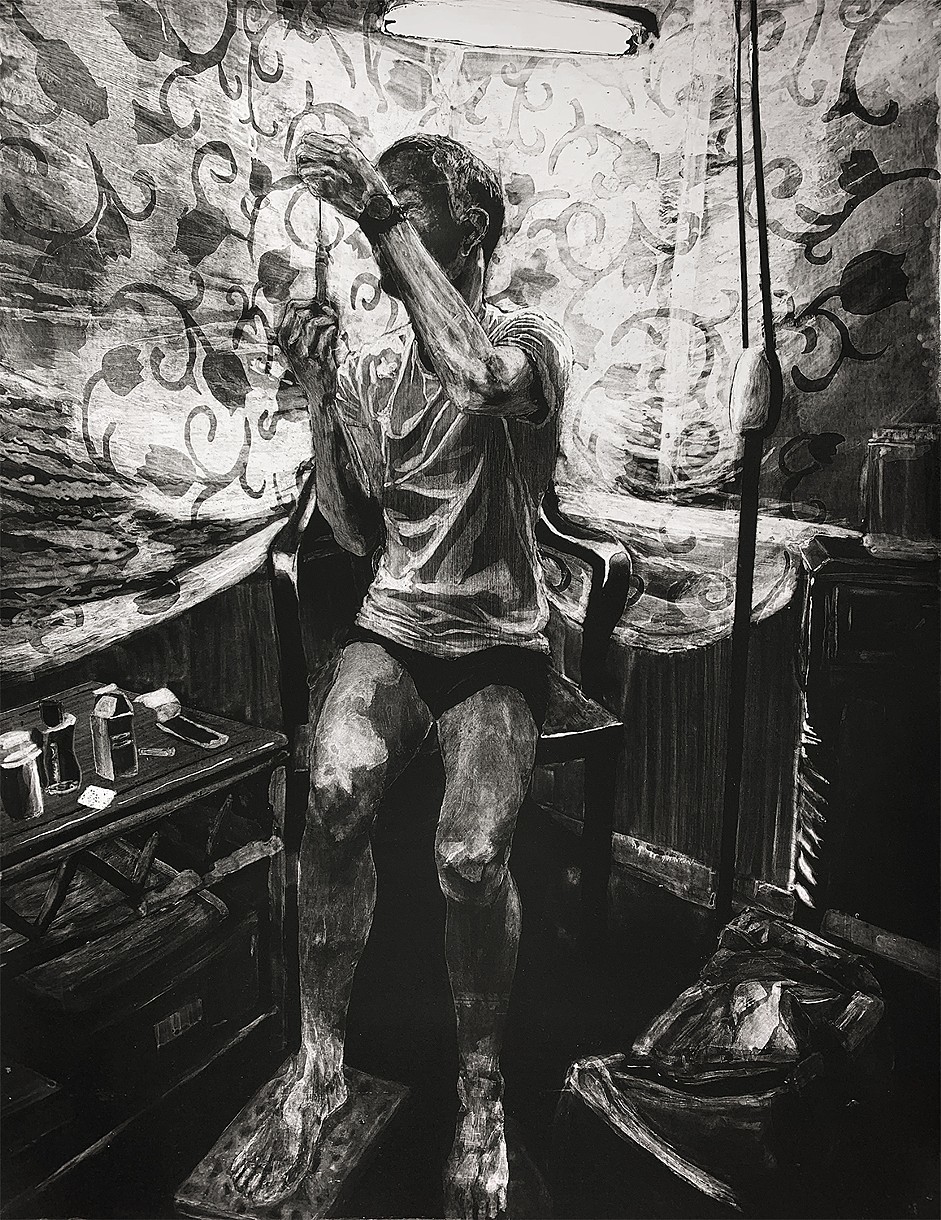 AS: Just to clarify, when you say ‘research’ in relation to art making do you mean that you’re on Google or in books, or are you testing and doing?

PD: I’m testing, I’m making test plates. I would just buy dozens of materials. The first week I experimented with different mesh sizes, different acrylic materials, and different ways of applying the mediums. I made a giant test plate that incorporated all of that information. These are materials that I knew were available for different purposes, but since this isn’t their intended use, no one could really tell me exactly what’s going to work best, so I just gave it a try. I feel like a lot of this, as far as I know, is original investigation in materials and preparation. I attempted to document all of this and shared it via my Instagram stories. 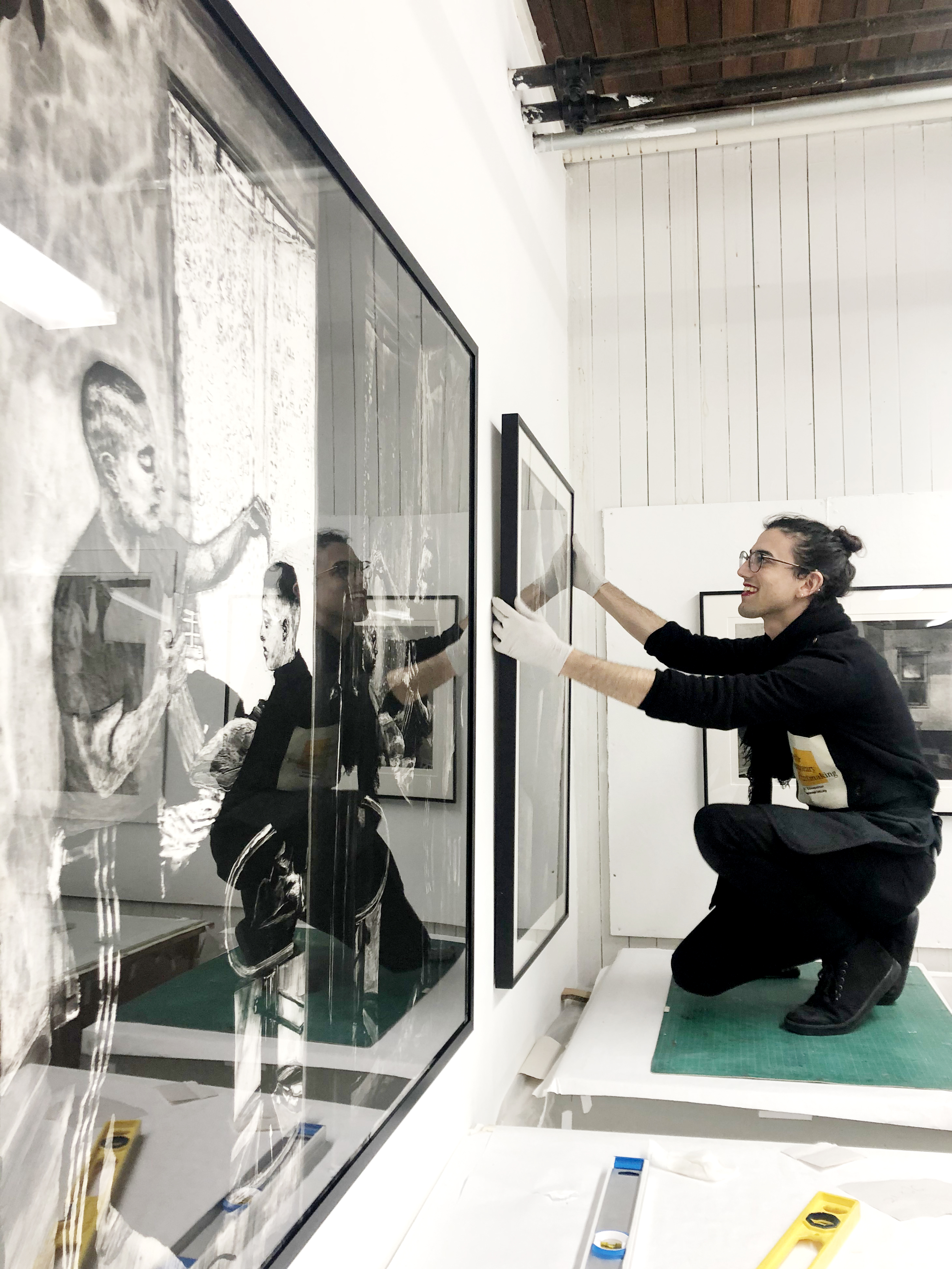 PD: The show was actually up in conjunction with the member’s show.  I made a piece that was an etching on a pillow case, with a pillow in it for last year’s member’s show, Surface Matters. It was awarded Best in Show, and the prize was a solo show the following year. As it turned out, that also coincided with it being up during my last month at CCP. It ended up making sense to make it a CCP retrospective. It was a nice chance to be able to look back at the work. It took looking back that far to see the threads that overlap and how much has been a consistent interest for me since Massachusetts College of Art and Design (MassArt) and before. It was a nice chance to see the connections and what has been consistent for the last 10 years in individual projects. I found there are threads that connected them. The show was a chance to highlight what starting as early as a printmaker at CCP meant for my work’s trajectory. 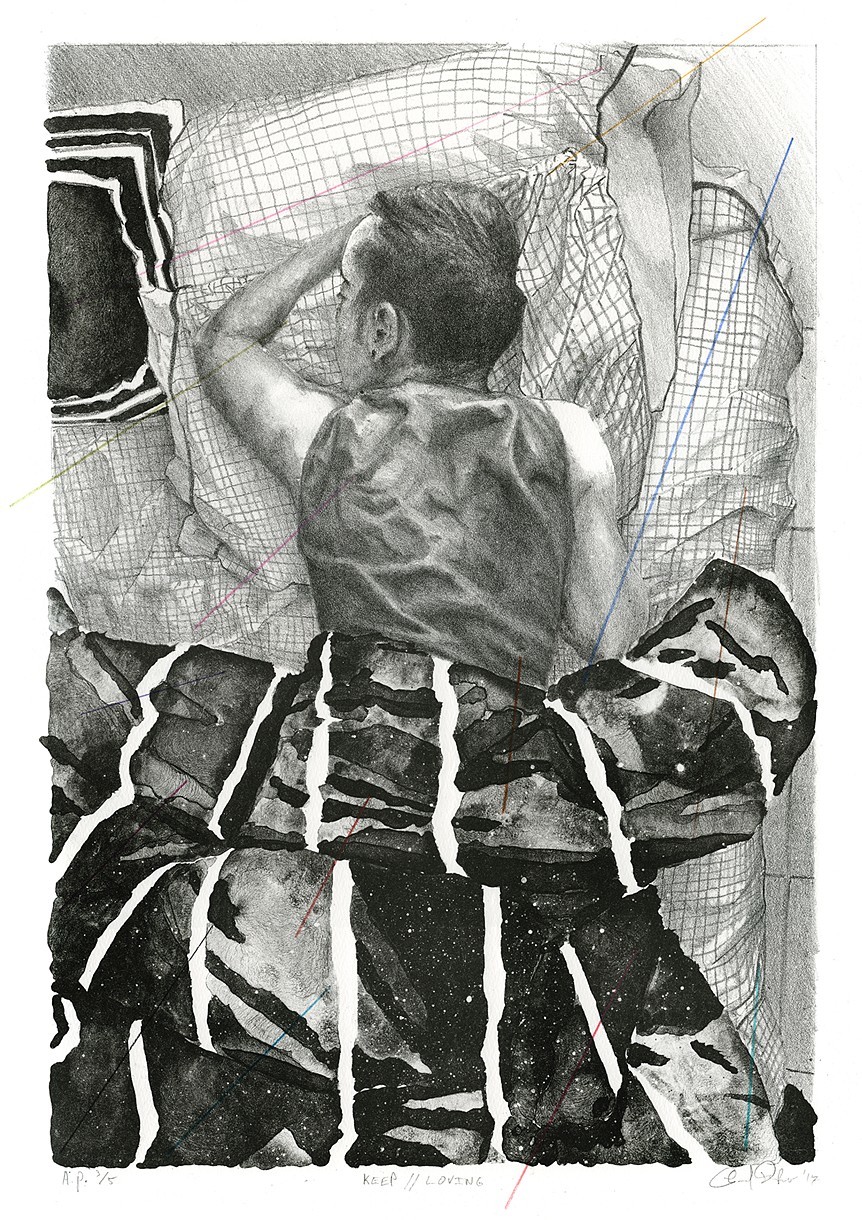 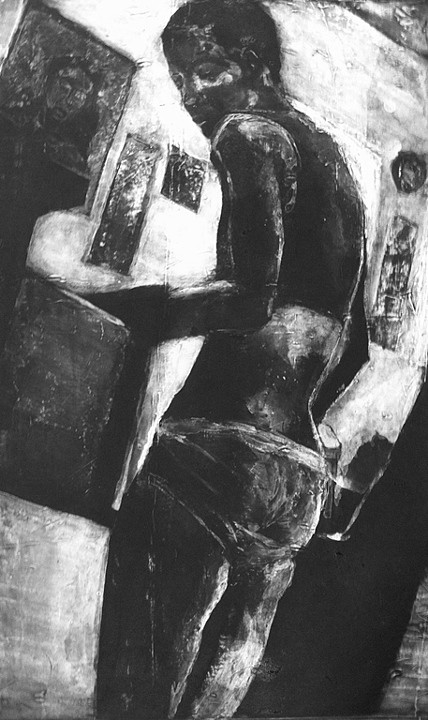 AS: As far as common threads, I can assume, but what have you found?

PD: I guess one thing I would say is that when you are a printmaker working in multiple media and in different techniques, each technique lends itself to something specific. It pushes back. A lithograph is going to give you different things than from your etchings and so on. I felt that I kept jumping between technical pursuits in the work. One piece would be more drawing based, the other one would be more painterly using silk aquatint. When I had the opportunity to look back, not just at one or two years worth, but all the work I’ve made so far, I could see that from one piece to the next, I might have seen aesthetic differences, but overall my subject matter, my compositions, and the way that I’ve come back to different scenes and my uses of the body, has been really focused regardless of medium. They didn’t present as different as I thought. My last residency at Atelier Circulaire, gave me an opportunity to return to a body of work that I actually started in 2010, with a piece that was focused on Elis cutting his own hair in the bathroom sink. That was directly the inspiration for the follow up piece to that, ‘Refection – Buzzing’. Which came back to focusing on personal rituals, which are scenes that are special significance for queer and trans people. They relate to daily practices and solitary moments that become significant, where the subjects are more vulnerable and taking active steps in what I think of as identity creation. 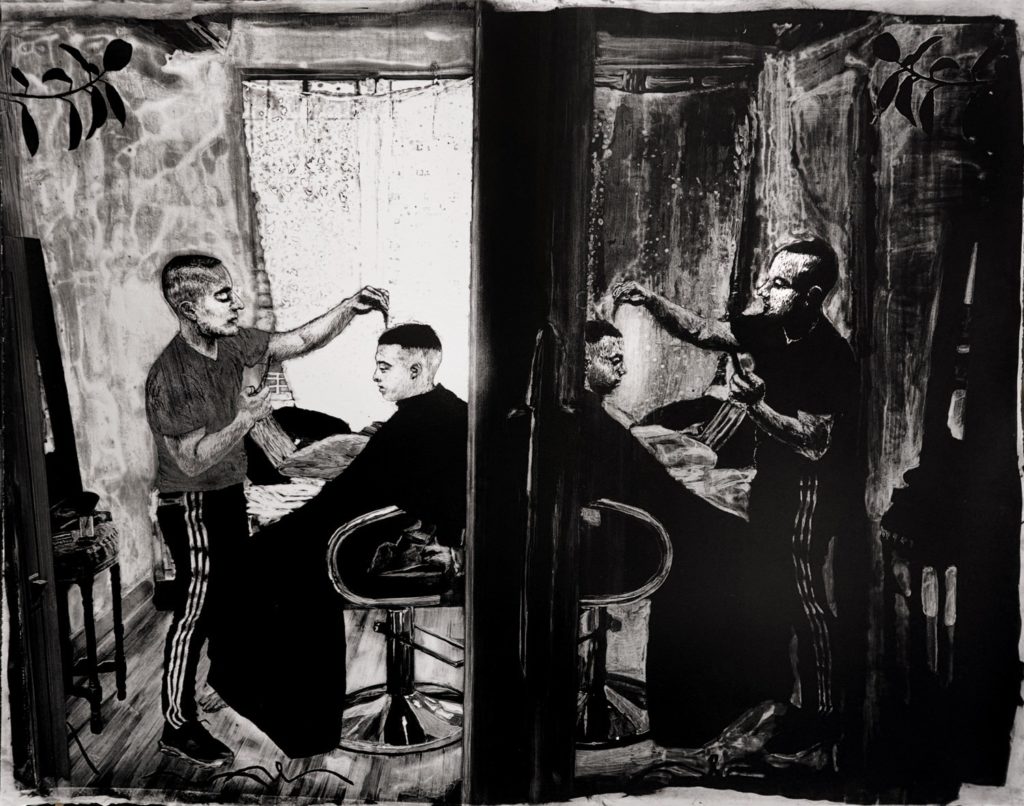 AS: Do you make the images to create normalcy or more representation or is it all a personal reflection on your part?

PD: I’m looking to create representations that are significant. They’re coded moments that have special significance for trans people. Through creating those representations I find that they are so familiar because everybody engages in the same behaviors, and when you are a queer trans person you are hyper aware of the choices because they are deliberate and often there is some amount of repercussions for making those choices. Meanwhile when I focus and talk about the significance of those things, I find that whether or not someone is part of the same community, the same actions are still significant, they just call less attention to themselves. So that’s something that I think, that through the devotional aspects of making the work, lets someone consider those routines more closely, and see the role that they take in their own life. 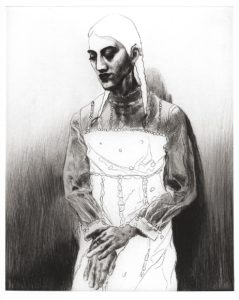 I don’t think that nearly anything is completely unique. It’s been interesting as new people unfamiliar with my work and the narrative have come in. They ask questions about what was going on in them – when Elis is doing his testosterone shot, if that wasn’t familiar to someone, they might have associated it with something like a diabetic injection or having some relation to the opioid crisis. I find that while those aren’t’t the readings I was going after, it brings to mind the same lack of representation for these significant moments in peoples’ lives. A piece that isn’t in the show, but I think relates is called “Modify x Transcend” where the subject has top-surgery scars without nipples reconstruction, leaving just two scars across their chest. These Scars have reminded some viewers of mastectomy scars. I didn’t know how similar the scars looked, even though that association made perfect sense. While that wasn’t’t my relationship to it, it was another moment that drew my attention to the many images, especially in representational fine-art. I think that there’s a lot of connection to other experiences that also lack a broad basis of knowledge and images. That’s been one of the connections I’ve found. People bring different things to it, yet they see familiar and underrepresented crossover points. 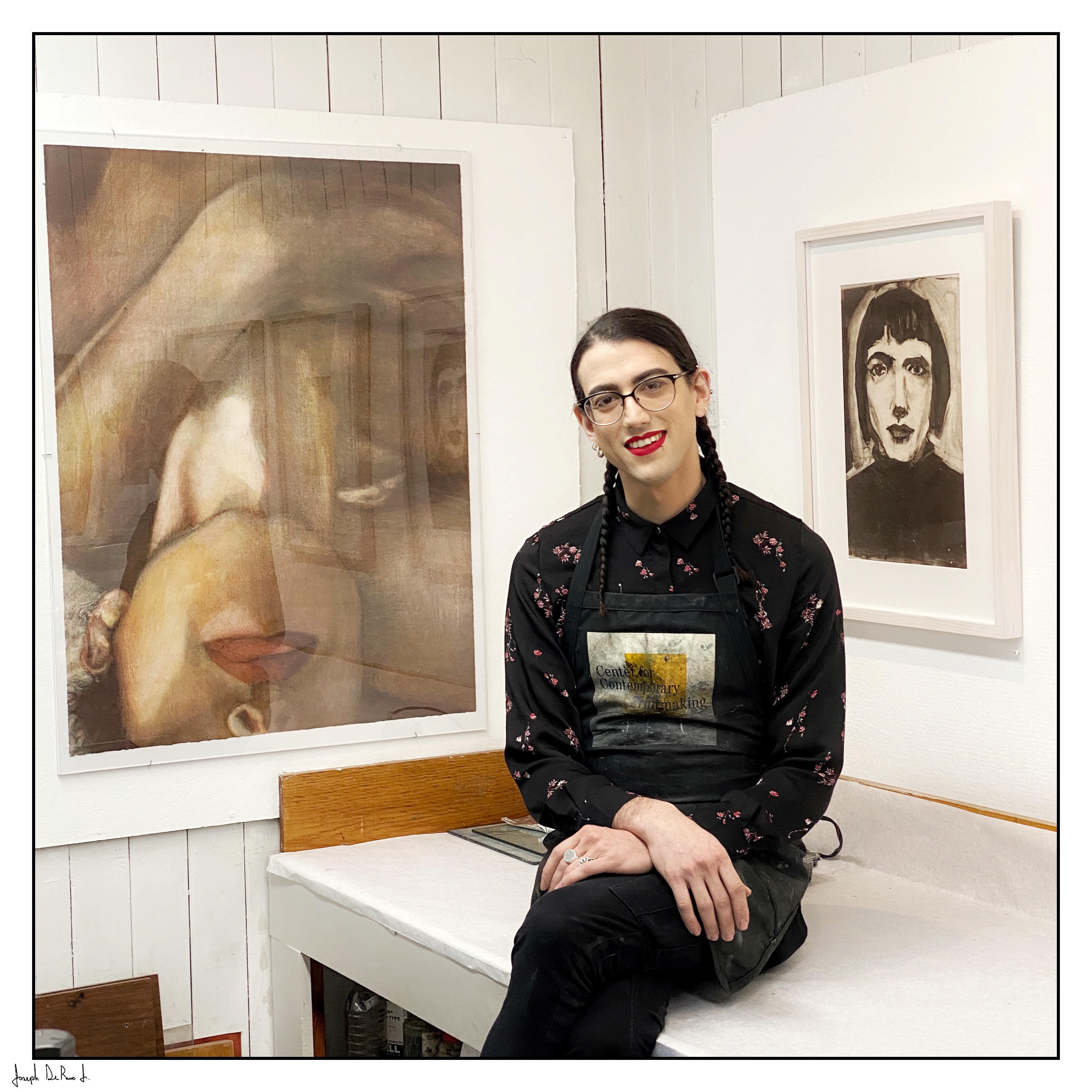