The Boston Printmakers was founded by a small group of senior students and faculty at The School of the Museum of Fine Arts, Boston and the Massachusetts College of Art. They held their first meeting in the Wiggin Gallery at the Boston Public Library in the autumn of 1947. Their host at this first meeting was the late Arthur Heintzelman, a distinguished etcher and the Library’s Keeper of Prints. Also in attendance were Ture Bengtz, head of the Museum School’s graphic arts department and Otis Philbrick, head of the Massachusetts College of Art’s painting and graphics department. This was a dynamic time that energized Boston’s art scene with students returning to schools on the GI Bill and a new confidence in the future.

The first exhibition was held the following spring, on the fourth floor of the Paine Furniture Company in Boston. Visitors had to field an obstacle course of beds, sofas, bureaus, and other household furnishings. The full gamut of contemporary printmaking was represented – etchings and dry points, linocuts, engravings, lithographs, woodcuts, wood-engravings, and even the newly popular serigraph.

The debut was such a success that the following year the Printmakers represented not only local artists and exhibitors from other parts of the United States, but also artists from England, Mexico and Canada. Works by conservative printmakers such as Heintzelman and Samuel Chamberlain, Elizabeth Saltonstall, Clare Leighton, Thomas W. Nason, Stow Wengenroth and John Taylor Arms found themselves in the company of the current avant-garde.  Along with Bengtz, who was a new immigrant to Boston, were John Wilson, Calvin Burnett, David Berger and Lydia Breed, all associated with the Boston Expressionist school. More broadly, via WPA, Atelier 17 or print centers of Mexico and Paris, were Letterio Calapai, Armin Landeck, Misch Kohn, Alfred Sessler and Minna Citron. George Lockwood, who opened Impressions Workshop in 1959, attracted a new wave of artists to Boston to print with him and established a strong sense of community.

From 1948–1991, The Boston Printmakers hosted the North American Print Exhibition annually. Due to the scale of the exhibition, it became a Biennial in 1993.

Today The North American Print Biennial exhibition is a juried exhibition open to all artists living and working in North America. Artwork can range from traditional print processes, through photo/digital media, into to expansive, interdisciplinary approaches. The many stimulating changes in printmaking over the past 75 years reflect the thematic emphasis of contemporary practice. The North American Print Biennial remains a premier venue for artwork based in print media. Throughout its history it has been held at The Museum of Fine Arts Boston, Hayden Gallery at MIT, the Rose Art Museum, the Duxbury Art Complex Museum, the Fitchburg Art Museum, the Danforth Museum, Boston University, Wellesley College, the Art Institute of Boston, the deCordova Museum and Lesley University College of Art & Design. Recent jurors have included artists Jim Dine and Willie Cole and Shelley Langdale, Curator and Head of Modern Prints at the National Gallery.

Currently, The Boston Printmakers draws its membership from all parts of the United States, Canada, the Caribbean, and Mexico. Membership is by jury twice per year; for more information see membership page.

60 Years of North American Prints by David Acton, a hardcover history of The Boston Printmakers chronicles the growth and expansion of the print medium since 1947 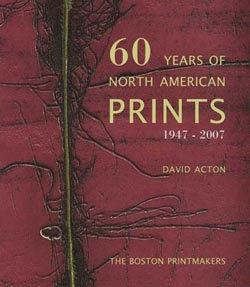