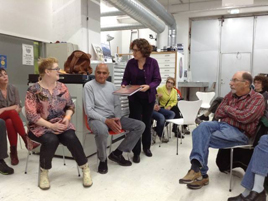 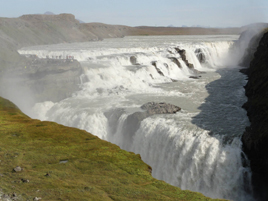 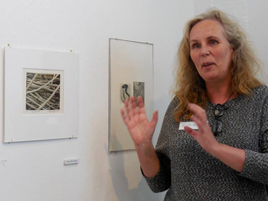 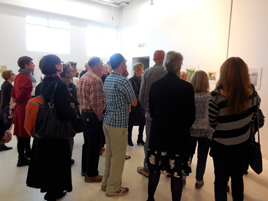 At the opening reception 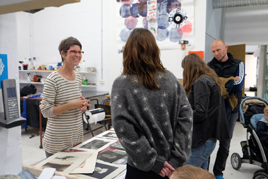 Nancy Deissner demonstrating her work during the “cultural night ” event 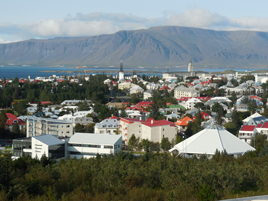 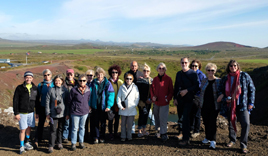 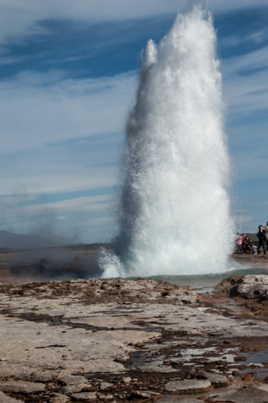 The Boston printmakers travel group (23) arrived in Keflavik, Iceland after a mere five hour flight from Boston. We were met at the airport by Gunnar, our affable travel guide, who assured us that the Icelandic weather would remain mild during our stay and that the volcano Bardarbunga would not threaten our visit. We traveled by bus an hour due north to Reykjavik and eventually settled into our accommodations at the Grand Hotel. We mounted a selection of our printed work in the lobby of the hotel in celebration of cultural week. Late in the afternoon we set out for the center of the capital city to the Haupnerhuis, a large building near the harbor which houses the workshop and gallery of the Icelandic Printmaking Association. We were met by a contingent of Icelandic printmakers represented by president, Soffia Saemundsdottir. After exchanging greetings, our president, Liz Shepherd, presented a brief history of The Boston Printmakers organization and then both groups convened to the gallery area for Viking style victuals {dinner for 34} consisting of traditional Icelandic meat soup followed by a selection of Icelandic cakes and coffee.

On Tuesday we set out for a tour of the Golden Circle, an awe- inspiring series of geologic wonders. Our first stop was Crater Lake, a 180-foot deep caldera crater with a vivid aquamarine lake formation at the bottom. Continuing along the circle we stopped at an Icelandic church and viewed a replica of a medieval Icelandic meetinghouse. The next stop was a visit to the magnificent Gullfoss waterfall and then over to Geyser Park. Gunnar, our guide, pointed out the relevance of the word “geyser” which is specifically derived from the Icelandic word “geysa” meaning “to gush”. After a full day of tours we continued on to our final leg of the trip with a walk through the ancient parliament site “Thingvellir”.

The following day we traveled south back toward the airport to a large geothermal pool appropriately named “The Blue Lagoon”. Still miles away from the area we could see plumes of steam billowing up from the base of the mountains. After entering the state of the art facility at the Blue Lagoon we bathed in the open pools of mineral rich water with deposits of white silica sand underfoot.

On Thursday evening the entire group met at the gallery for an opening reception featuring a selection of printed work from each group. Before the reception began all the participating artists congregated in the gallery and one by one gave a brief explanation of their printmaking method. The event was well attended, broadcast by the local media, and endorsed by the American Consulates’ Charge’ D’affaires who spoke to the group about the importance of promoting artistic and cultural exchange.

On Friday several members continued to explore the natural wonders of the countryside while others visited museums and historic sites in the city.

The most festive day of the year “cultural night “took place on Saturday. Earlier in the day we had arranged to perform print demonstrations inside the workshop gallery. Four artists from our group explained the various print techniques to a crowd of curious onlookers who seemed truly inspired by our activity. In the early evening we walked over to the library building situated next to the workshop to view more artworks from the Icelandic Printmakers. A large group of onlookers moved in and out of the exhibition hall while the newly elected mayor of Reykjavik addressed the people in attendance. Outside of the building were herds of people roaming the streets, enjoying the various music venues and video-tron projecting out towards the huge crowd. As darkness descended on the city, a unique, double fireworks display lit up the sky, sending bursts of choreographed light streaming over the harbor.

Sunday morning was our travel day back to the airport for our flight to Boston. Members returned home with a selection of Icelandic delicacies including lamb, river salmon, chocolate, liquorices confect and assorted readings from the noted Icelandic author, Halldor Laxness, the Noble Prize winner in literature. I thought I knew everything there was to know about this country but I was sorely mistaken. Art is everywhere in Iceland, from the understated urban design elements, to the publicly displayed relics of its Viking past- the country preserves its cultural heritage at all costs and embraces its connection to the sacred landscape. When you travel to a distant land you are helpless and vulnerable. Your survival mechanism kicks in and you are hyperaware. It’s sensory overload. Our differences prompt us to take a closer look and make comparisons, contemplating the current state of art-making, and our contrasting American lifestyle. The interaction with the artists from this small island nation has fostered a mutual respect and understanding between our groups. Nothing takes the place of personal interaction and the Icelandic printmakers met the challenge of our visit, displaying a deep sense of community when the invading Boston printmakers arrived in their studio. These collaborative ventures feed into a new unfolding definition of what it is to make art, what attracts an artist to utilize a particular technique and what it means to explore a new visual language through printmaking. The real impact of our visit has yet to be understood.
Bob Tomolillo

This trip inspired Continental Drift: Printmakers Converge, an exhibit of work by The Boston Printmakers and the Icelandic Printmakers Association at the Belmont Gallery of Art in Belmont, Mass.

The Icelandic printmakers will show recent prints at the Scandinavian Cultural Center in West Newton. The Scandinavian Center’s Nordic Hall will host its Artists Reception and Talk, Thursday., November 20, 5:30 – 7:30pm.