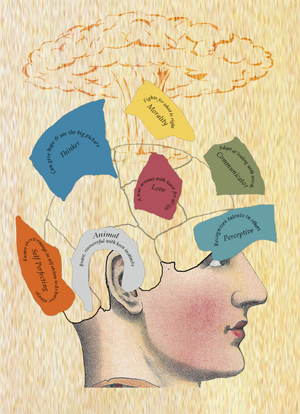 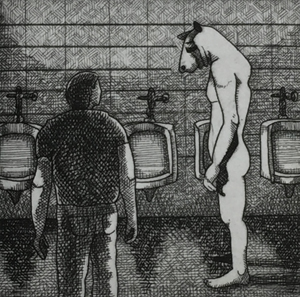 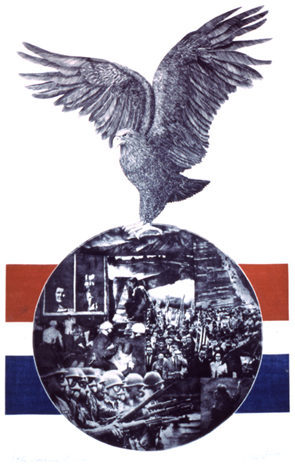 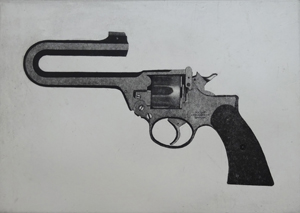 PHOTO GALLERY OF THE SHOW

CATALOG OF THE SHOW

Opening Reception: Friday, November 4, 5 – 7 pm
Followed immediately at 7pm by: My Take: Student Performers on Citizenship and Politics
Pictures of the Opening Reception

Gallery Talk: The Print’s Powerful Potential: Boston Massacre Redux
Saturday, November 5, 10 am
Bob Tomolillo, board member of The Boston Printmakers, will discuss how artists have used print imagery to call attention to social injustice. As part of the presentation, Bob will be joined by master printer Robert Townsend, who was entrusted with the reprinting of the copper plate of Paul Revere’s Boston Massacre print in 2003. Townsend will explain technical aspects of the process and highlight the controversy that still lingers around the project.

Film Screening: Art Is… The Permanent Revolution
Thursday, November 10, 6:30pm
Mayer Auditorium
This film explores how social issues and revolution are conveyed through art. Watch as contemporary printmakers – two of whom are part of the Lamont Gallery’s current exhibition: 2016, A State of Mind– create artworks that engage us with current social issues.

Monotype Workshop
Wednesday, November 16, 2 – 4pm
Is it a painting or a print? By definition, monotypes are created by pressing paper against a painted or inked surface. Experiment with a variety of inks, printing techniques, and papers to create a few of your own original monotypes. Free and open to all – materials will be provided.
Please RSVP to gallery@exeter.edu by November 9.

Energy conservation, wealth opportunity, LGBT rights, global warming, issues of national security, immigration, animal rights, voter suppression, or issues of privacy are some of the concerns facing our diverse community. The problems are immense, but the impact to the culture at large appears diffuse and trivialized by news media’s frantic bombardment of messages. We hope to establish a reasoned, well placed, forum for the issues at hand by asking members to consider participating in the next Boston Printmakers members exhibit titled, 2016, A State Of Mind.

Pick-up work:
Wednesday, December 14, 9am-12pm or 1pm-5pm, Thursday, December 15 from 2-7 pm.
Work shipped to us will be re-packed and shipped starting on December 15.
Work left in the gallery after December 19 will not be covered by gallery insurance. Work left after January 10 will become property of Lamont Gallery.