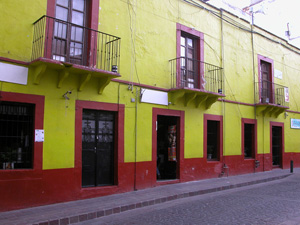 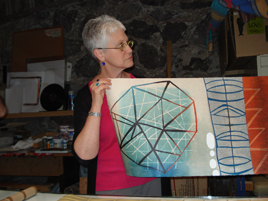 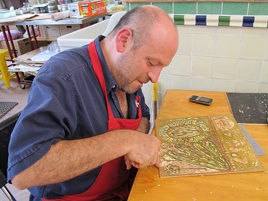 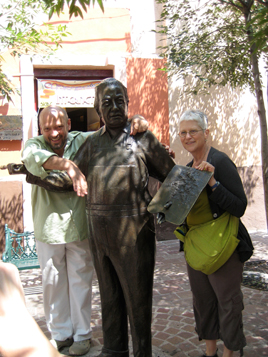 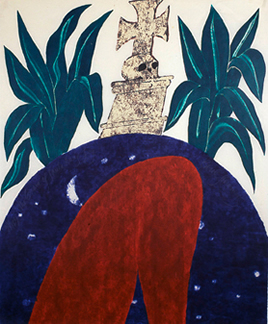 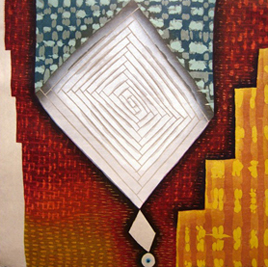 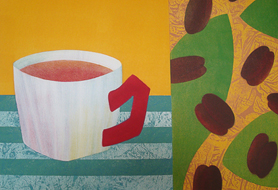 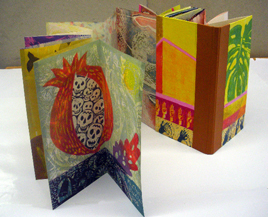 Written by: Carole Bencich and Kristen Struebing Beazley
Arriving in Guanajuato, Mexico for an International Forum on Creativity, The Boston Printmakers settled into restored historic accommodations with very auspicious names: La Casa de Espiritus Allegres (House of Happy Spirits) and Alma del Sol (Soul of the Sun).  Both bed and breakfasts offered rich and stimulating settings for art, La Casa with Carol Summers’ collection of Mexican folkloric art, and Alma del Sol with Summers’ international collection of heirloom textiles.  Happy spirits did indeed preside over the busy week of sightseeing, workshops, conversation, food and printmaking.
Renee Covalucci coordinated a program that included two days of cultural touring to Diego Rivera’s birthplace, several pottery studios, and local cathedrals along the way to San Miguel de Allende.  Since this was also the route of the 200-year-old Mexican war for independence, we got a preview of the Bicentennial Festival which will take place September 2010.
Carol Summers, Karen Kunc, and Hugo Anaya presented workshops at La Casa’s studio in which they shared their inventive techniques for creating woodblock prints.  Later the group moved to Jim Hibbard’s and Hugo Anaya’s large Piramidal Grafica studio to begin work on a collaborative book and gallery exhibit.  Each of 16 artists made two 11.5” square prints, drawing from the vibrant colors and natural and cultural images of Mexico, including the retablo, an iconographic rendering of a miracle experienced or disaster survived, together with a statement of thanks.  The retablo format features a two-part structure, often incorporating text below the image.
The printmakers shared not only a common studio space, but inks and tools and individual inspirations from the three workshops.  Mentoring and collaboration easily took place in the Piramidal Grafaica’s generous space.  The studio, like La Casa de Espiritus Allegres, was built within the ruins of a 17th century silver mine hacienda, with adaptive architecture featuring stone arches, boveda curved brick ceilings, and lush gardens.
At the end of a hardworking week, printmakers celebrated with a gala dinner hosted by La Casa.  Chef Angelica Anaya outdid herself with Chiles en Nogada, a delicious stuffed pepper dish dressed in goat cheese sauce and garnished with bright red pomegranate seeds – the red, white and green imitating the colors of the Mexican flag.   The printmakers’ week was not only productive it was a personally rewarding time for all.

Printmakers Residency leads to Mexican/American Exhibition
Laconia Gallery and the Boston Printmakers present Guanajuato 2010, an exhibition of woodblock prints and monoprints whose explosive color and exuberant life leap off the walls of the gallery. Along with a spectacular body of work by internationally known artists Carol Summers, Karen Kunc and Hugo Anaya, the show features books and individual prints by participants who joined them in an artists’ residency, Forum on Creativity, offered by The Boston Printmakers and organized by Renee Covalucci. This dynamic, collaborative residency took place in Guanajuato, Mexico in the highlands of the Sierra Madre Oriental in August of 2010.

Retablos, found in area churches and local art collections are the powerful central theme of all the work created during the workshop. Called “laminas” in Mexico, retablos are small oil paintings on tin, zinc, wood or copper that venerate Catholic saints and events or miracles. This folk art – colorful, spiritual, symbolic, and allegorical – is echoed in the work of Summers, Anaya and Kunc and in the retablos created during the residency. Here the work is a personal, celebratory visual record of our reactions to the music, art, history, people, and vibrancy of Guanajuato.

Carol Summers is widely known as one of America’s foremost printmakers. He is renowned for his vivid colors and his revolutionary woodblock techniques. Summers’ work is in the collections of The Art Institute of Chicago, Metropolitan Museum of Art, The Museum of Modern Art, and countless other museums worldwide. Hugo Anaya was born and raised in Guanajuato, GTO, Mexico. He studied in the US at the Portland Art Museum School and Portland State University. His work has been exhibited in Oregon art galleries, and in and at the Gene Byron Museum in Guanajuato. Hugo’s work is in public collections including the Gilkey Print Center in the Portland Art Museum, and in countless private collections. Karen Kunc is the Willa Cather Professor of Art at the University of Nebraska – Lincoln. The Museum of Modern Art, NY and The Machida City Museum of Graphic Arts, Tokyo, own her prints and artist books, as do countless other museums worldwide, while exhibitions of her work occur regularly around the globe.