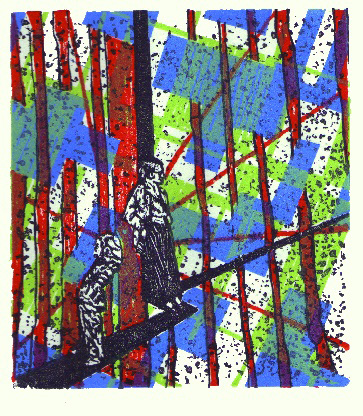 “Them” is a five-block, four-color relief print made from a cherry wood key block over a linoleum (blue) and two mat board blocks (red and green) –all of which is over-printed by a matrix of small stones. It (and the other two in the series) is a deconstruction of topographic maps, using the same colors but generalizing and/or enlarging the shapes, and then superimposing figures onto the “maps.” For the exhibition, “Mapping” (at the Arts + Literature Laboratory in Connecticut), I wrote in part: “In the face of the enormity of the universe, in the face of its complexity and its indifference, we attempt to locate ourselves to determine where we are, where we think we should be and ultimately where we might go. While the well-known joke says, ‘you can’t get there from here,’ the reality is that you can’t get anywhere except from ‘here.’”